April is Esophageal Cancer Awareness Month, but this is not your average disease awareness story. With a new, fully robotic approach, thoracic surgeons at St. Joe’s have changed the way that esophageal cancer surgeries are performed. It’s the most significant advancement in surgery for esophageal cancer in Canada in more than two decades.

“While esophageal cancer rarely makes headlines, it has the second highest mortality rate of all cancers,” says Dr. Waël Hanna, a thoracic surgeon at St. Joe’s and the head of research within the Hospital’s Boris Family Centre for Robotic Surgery. “It’s so deadly because the esophagus is deep in the throat and thorax and has historically been difficult to operate on using traditional surgical methods.”

The complication rate for those undergoing a traditional esophagectomy (a procedure to remove the cancerous portion of the esophagus while pulling the stomach up in the chest cavity to reattach it) is as high as 60 per cent. This is due to the procedure’s hand-sized incision, the trauma caused to the patient’s chest cavity, and the lengthy recovery stay required post-surgery in the ICU that often results in struggles with pneumonia, infections and heart complications.

No one knows that better than Georgetown, Ont., resident Jackie Dean-Rowley. Her daughter Rachel Chuvalo was diagnosed with esophageal cancer in 2011 when she was just 29 years old. At that time, traditional surgery was the only option.

“She stood five-foot-two, was fit and trim,” says her mom, Jackie. “It’s hard for me, even now, to think of her small beautiful body experiencing such trauma. But Rachel was a fighter.” Rachel experienced complications after her surgery and eventually succumbed to her disease in 2013.

It was eight years after Rachel received care at St. Joe’s that Jackie learned about the promise robotic surgery was showing in treating patients with various forms of cancer. She met with Dr. Hanna and learned he was researching how to perform a new procedure to help people living with esophageal cancer. Jackie knew she had found a way to honour Rachel’s memory and make a difference in the lives of those living with the same disease that claimed her daughter.

Jackie made a $10,000 gift to help Dr. Hanna and his thoracic surgery colleagues to receive special training on how to use a surgical robot to perform procedures on the esophagus. On March 30, 2022, that training was put to use as Dr. Hanna and Dr. John Agzarian performed the first fully robotic esophagectomy in Canada on a 74-year-old Burlington, Ont., man named David Paterson who was diagnosed with esophageal cancer in October 2021.

“The surgery took approximately eight hours to complete and was performed through a number of small incisions ranging in size from eight to 12 mm in the patient’s abdomen and chest,” Dr. Hanna says. He walked out of the Hospital eight days later. From our perspective, everything went very, very well. But what matters most to us, is how our patients are feeling after surgery, and whether we were able to achieve the cancer operation that we intended.”

Just over three weeks out of hospital, David is at home and says he is now in remission. “With Dr. Hanna’s care and support, I’m happy I made the decision to receive the first fully robotic surgery for this type of cancer in Canada. It was daunting at first, to know that you’re the first person they have operated on this way. But once Dr. Hanna explained how the robot could pinpoint removing only the cancerous portion of my esophagus, while also making it easier for me to recover, it seemed like the right decision. I don’t know what traditional surgery would have felt like, but from what I have heard, it would have been much more painful and hard on my body. I definitely feel fortunate to have had this opportunity. Hopefully, it means other patients like me will have a better quality of life post-surgery.” 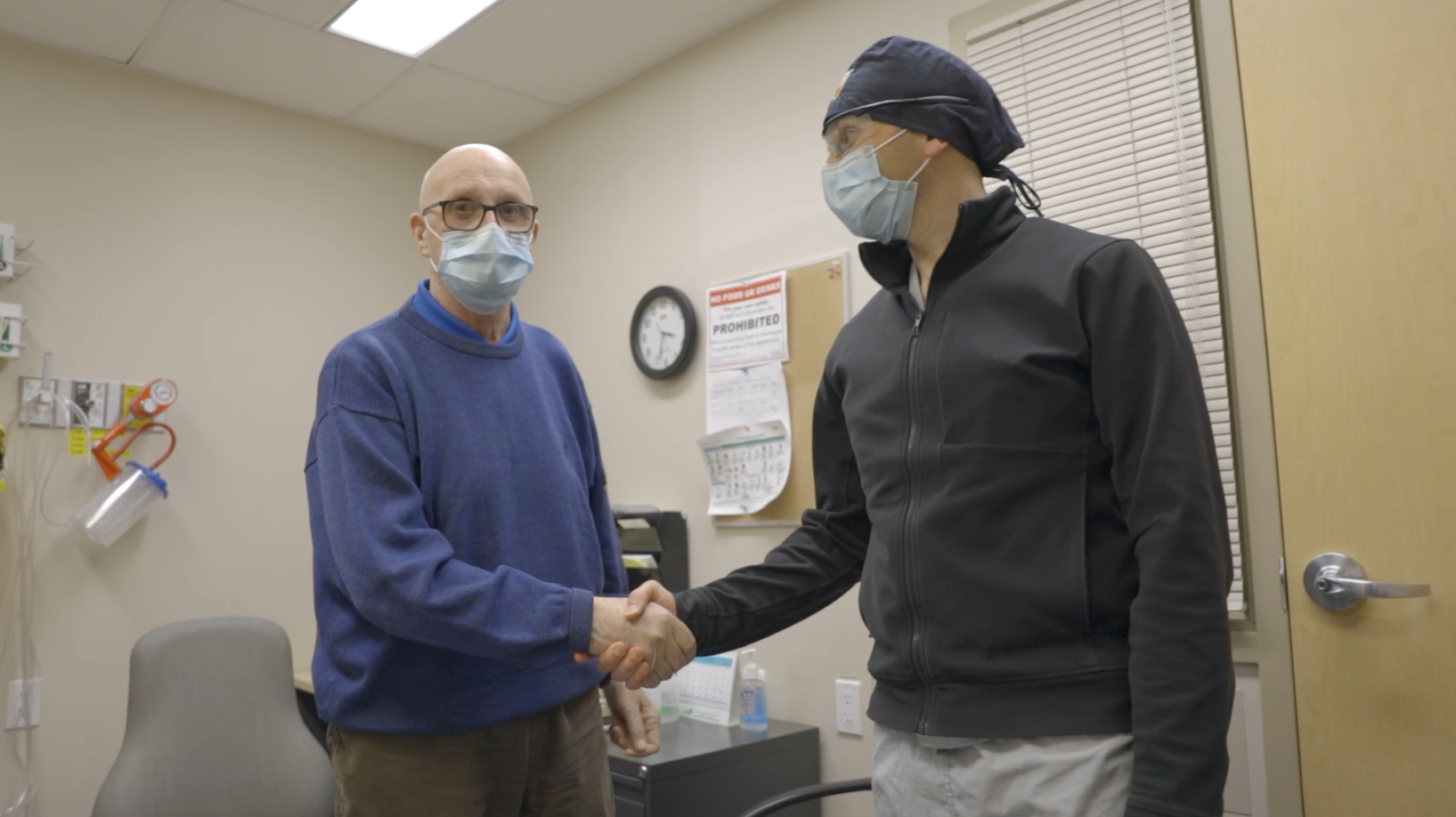 In addition to the robotic surgery training Drs. Hanna and Agzarian received, St. Joe’s sought approval from its ethics board as well as Health Canada before embarking on the procedure. The surgery was also proctored by Dr. Daniel Oh from the University of Southern California, a centre of excellence in robotics. Robotic surgery is not yet funded by OHIP and is only made possible through the generosity of donors in our community and funding from the Hospital as St. Joe’s believes robotic surgery has the power to speed up healing, be more cost-effective, and ease pressures on the healthcare system.

“Here at St. Joe’s, we’re not just using a robot because it’s new or flashy. We’re using it to advance patient care. To change the way procedures are performed. To develop new procedures to help those whose cancers were previously thought to be inoperable,” says Dr. Anthony Adili, Chief of Surgery at St. Joe’s. “We’re changing and improving care for patients like Rachel and David, and those who will follow in the future. We’re grateful to all of the donors who have made it possible for us to deliver this kind of care to our community.”