Long-time St. Joe’s Physician Trish Murphy Leads a Team of St. Joe’s Staff Who Volunteer Their Time to Provide Medical Care and First Aid at the Around the Bay Road Race

Over the past few weeks, we’ve been celebrating the St. Joe’s staff who were walking, running and raising funds for our Hospital through the Around the Bay Road Race. But there’s another contingent of St. Joe’s staff who also play a vital role on race day.

Patricia Murphy is a physician at St. Joe’s who works most days in the Psychiatric Emergency Service at the Charlton Campus. Since 2006, she’s also led the medical team on site at FirstOntario Centre for the Around the Bay Road Race. Each year, she recruits a team of approximately 15 physicians, nurses, staff and volunteers to provide first aid and medical attention at the finish line to a field of runners that can range from 8,000 to 12,000 participants. 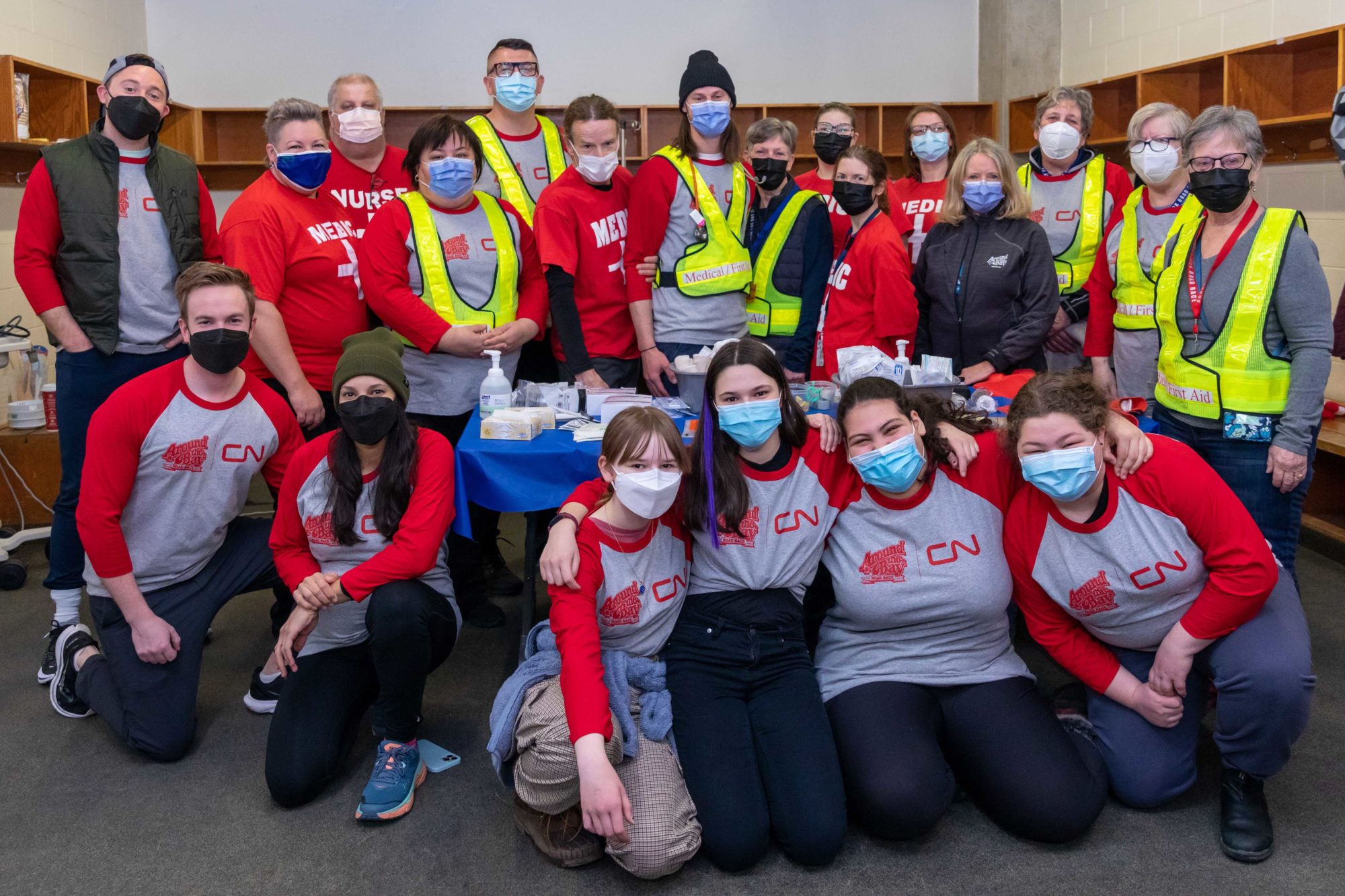 “The nurses this year are mostly from the emergency department and the ICU…two departments that have been hardest hit by the COVID-19 pandemic. I was worried it might be hard to recruit a medical team this year as nurses are just so exhausted. But there they were, responding right away, happy to help and to see the Bay Race back in all its glory,” says Trish, who has run the Bay Race four times. “I’m just overwhelmed by their tireless efforts and their unbreakable spirit. We’re also grateful to Doug Richards for agreeing to be the Emergency Physician on site this year.”

In addition to the staff volunteering their time, Trish says Hospital departments like Linens, Respirology, Biomedical Engineering, and Pharmacy are essential to providing supplies and equipment for the make-shift medical centre inside the team changerooms at ice level.

“We have quite the set up there,” she says. “From IV poles to administer fluids, to cardiac monitors and EKGS, first aid supplies, an eye-wash station, and a musculoskeletal assessment area…we’re prepared for just about anything.” Unused supplies and all equipment are returned to the Hospital once the finish line is dismantled for the day.

Among the most common medical issues Trish and her team see are sprains and strains from running, cuts and scrapes from falls on the roads, dehydration, asthma and chest pains, and some nausea, too.

“Fortunately, we haven’t seen too many serious health events at the race over the years, but there’s always an ambulance on standby, just in case,” Trish explains reassuringly.

When asked about her favourite part of the Bay Race, Trish says, “I think it’s seeing the combination of elite runners and community members leaving it all on the course. Runners come in all shapes, sizes and abilities, but the joy we get to see on their faces as they cross the finish line is universal. Whether you run 5k or 30k, it’s an accomplishment and being a part of the Bay Race is something very, very special.”

2022 marks the first in-person Around the Bay Road Race since 2019. It’s also the 17th year St. Joseph’s Healthcare Foundation has been the official charity partner of the race. This year, $275,000 was raised to support the expansion and renewal of the department where Trish works every day, our Psychiatric Emergency Service. The funds will also help to bring a new CT Suite to the Emergency Department.