Making an Impact Now and in the Future

Kenny Cheng quietly reflects, “I’ve quite literally experienced the full circle of life at St. Joe’s—from my child’s first cry to my father’s last breath. And each and every time, the staff has been there to guide and support me.”

Kenny’s relationship with the Hospital began in 2007 when his late father, Phillip, passed away peacefully in the Intensive Care Unit (ICU) at St. Joseph’s Charlton Campus from complications due to liver cancer.

“The staff at St. Joe’s was so kind, hospitable and accommodating. It was my first time facing the death of a loved one where I was so heavily involved in their care. My mom wasn’t proficient in speaking English, so the conversations with my father’s team of care providers primarily fell on me. They made a difficult process as peaceful and pain-free as possible for everyone involved,” said Kenny.

Kenny’s next experience with St. Joe’s hit just as close to home, when his mother, Viola, fell very ill in 2015 and was admitted to St. Joe’s for further testing.

“Very quickly, the staff at St. Joe’s diagnosed that she was having trouble with her kidneys and they immediately referred her to a nephrologist within the Hospital, Dr. Matthew Miller. Thanks to their speedy work, my mother is much better now. She’s living at home, enjoying life while still checking in with Dr. Miller from time to time. We owe everything to St. Joe’s for quickly diagnosing her illness and connecting her to the professionals that could provide her with the treatment she needed.” shared Kenny.

Kenny’s first gift to St. Joe’s came in 2015 to support kidney care. It was during his mother’s stay at St. Joe’s that Kenny noticed the glass panels of St. Joseph’s Healthcare Foundation’s Garden of Grace Donor Wall. That was the moment Kenny decided to make his second gift to St. Joe’s – a one-time donation as part of St. Joseph’s Healthcare Foundation’s Miracle Worker Program, recognizing Dr. Miller and his staff for their compassionate care of Kenny’s mother.

Just a few years later, in 2018, Kenny found himself at St. Joe’s again when wife Anna gave birth to their first child—a boy named Edwin. “Anna and I found ourselves relying on the team in the Mother & Baby Unit to guide us through becoming parents for the very first time. From how to hold and swaddle our baby, to how to feed him, the nurses were so helpful and kind.  It made me think to myself: ‘So many people at this Hospital have helped me and my family…what else can I do to help others?’”

The answer came to Kenny when he was leaving the Hospital with Anna and Edwin and passed by the Garden of Grace Donor Wall for the second time.

“The Legacy Panel on the Garden of Grace Donor Wall recognizes gifts made through the estate and would allow me to honour my family name, while leaving behind a gift to St. Joe’s which will benefit others with the same quality of care we have been so fortunate to receive ourselves.”

There are many different options to posthumously support St. Joe’s, and the differences between a Life Insurance Policy and Will can sometimes be difficult to decipher. A gift of life insurance is a modest annual premium paid over time which will result in a significant future gift for St. Joseph’s Healthcare Hamilton as the beneficiary. A Will is the most common type of planned gift. A bequest in your Will is easy to set up and allows you to make a future gift to St. Joe’s without affecting your income today.

According to a 2017 Angus Reid poll, over 50% of all Canadians don’t have a Will. An employee with the Hamilton-Wentworth District School Board (HWDSB), Kenny is a generous donor to St. Joseph’s Healthcare Foundation both today and in the future through a planned gift through his estate. November is Write a Will Month across Canada, so we asked Kenny to impart why he feels having a will is so important.

“I cannot imagine leaving my family with the burden of arranging my estate affairs after my death. It would be an added burden at an already stressful time. Having a Will secures my wishes and ensures my family will be looked after during difficult times.”

But a Will can do so much more than that. In addition to providing security for your loved ones, a Will can also be an incredible vehicle for leaving a planned gift behind that will benefit any charities, foundations or organizations that hold a special place in your heart. Many people at Kenny’s stage of life may not have the financial security to make a large gift during their lifetime, so planned giving enables people to plan for a future gift using their estate while not impacting their day to day finances.

We asked Kenny if he had any final thoughts about why he chose to give to St. Joe’s both now and in the future. He said, “Philanthropy is never time-bound, so choosing to give now or to give later is almost irrelevant. It’s making the choice to give that benefits society in ways we cannot even imagine.” 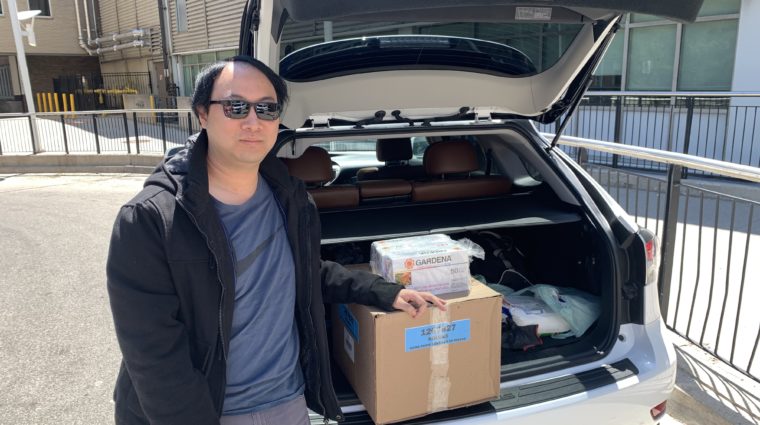 Our thanks to Kenny Cheng for continuing to support St. Joe’s when we need it most. On Wednesday, May 13th Kenny delivered 12 boxes of gloves for a total of 600 gloves to help our front line staff stay safe and protected during the COVID-19 crisis.